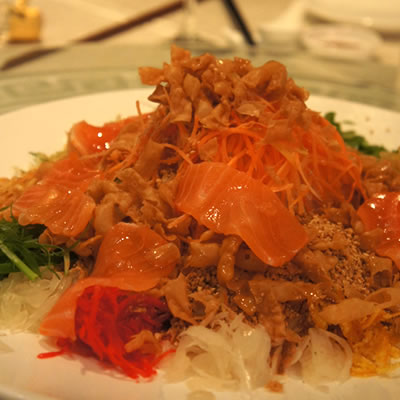 The Chinese Lo Hei also know as Yusheng, yee sang or Prosperity Toss is a Teochew-style raw fish salad. It usually consists of strips of raw fish (most commonly salmon), mixed with shredded vegetables and a variety of sauces and condiments. Yusheng literally means “raw fish” but since “fish” is commonly conflated with its homophone “abundance”, Yusheng is interpreted as a homophone for Yusheng meaning an increase in abundance. Therefore, yusheng is considered a symbol of abundance, prosperity and vigor. Popularised in Singapore amongst the ethnic Chinese community, its consumption has been associated with Chinese New Year festivities in Singapore and Malaysia. The Singapore-based Lo Hei had fish served with white radish, carrots, capsicum, turnips, red pickled ginger, sun-dried oranges, lime leaves, Chinese parsley, chilli, jellyfish, chopped peanuts, toasted sesame seeds, Chinese shrimp crackers, five spice powder and other ingredients, laced with a sauce using plum sauce, rice vinegar, and sesame oil. Lo Hei is often served as the appetizer due to its symbolism of “good luck” for the new year. Some would consume it on the seventh day of the Chinese New Year, although in practice it may be eaten on any convenient day during Chinese New Year (1st to 15th Day). The base ingredients are first served. The leader amongst the diners or the waiter proceeds to add ingredients, such as the fish, the crackers and the sauces while saying “auspicious wishes” as each ingredient is added, typically related to the specific ingredient being added. All diners at the table then stand up and proceed to toss the shredded ingredients into the air with chopsticks while saying various “auspicious wishes” out loud. It is believed that the height of the toss reflects the height of the diner’s growth in fortunes, thus diners are expected to toss enthusiastically.