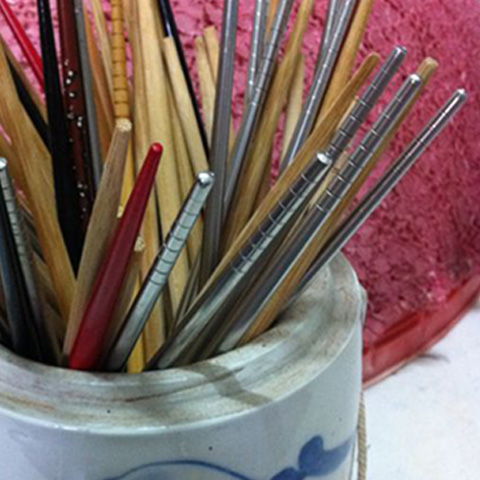 Chopsticks are typically used by Asians as an eating utensil, among the Chinese, Japanese, Korean and Vietnamese community. It is believed to have originated in ancient China.Chopsticks are short and usually tapered sticks used in pairs of equal length and commonly made of wood, bamboo, plastic, metal, bone and ivory.

Chopsticks are held in the dominant hand, between the thumb and fingers, and used to pick up pieces of food.

To use chopsticks, the lower chopstick is stationary, and rests at the base of the thumb, and between the little finger and ring finger. The second chopstick is held like a pencil, using the tips of the thumb, index finger, and middle finger, and it is moved while eating, to pull food into the grasp of the chopsticks. Chopsticks, when not in use, are placed either to the right or below one’s plate in a Chinese table setting.

In chopstick-using cultures, food is generally made into small pieces. Additionally, in traditional Chinese culture, holding the rice bowl up to the mouth and using chopsticks to transfer the rice directly into the mouth is considered proper eating etiquette.

However, it is a taboo especially among the Chinese and Japanese to stand the chopsticks on a bowl of rice as it resembles the way rice is offered to the dead.