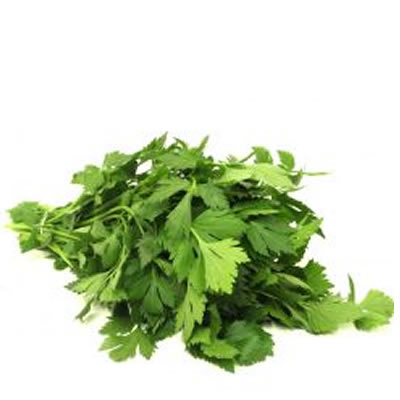 Coriander leaves, also known as cilantro, are a common ingredient in the cuisines of the Middle East, Central Asia, the Mediterranean, India, South Asia, Mexico, Texas, Latin America, China, Africa and South-East Asia. Today, it is mainly eaten as part of foreign dishes in Western Europe, even though coriander was formerly common in European cuisine. Coriander leaves, stalks and roots have a distinctive citrusy aroma, and is used to flavour soups such as Thai tom yam, salads, Mexican salsa and guacamole, and as a garnish for dishes such as Chinese roasted meats and Indian chutneys, dhal and curries. As heat diminishes its flavour quickly, coriander is often used in raw form and added to dishes immediately before serving. Dried and crushed coriander seeds are commonly used as a spice in both Asian and Western cuisines, and are usually described as having a warm, nutty, spicy and orange-like flavour. As a spice, coriander is a source of antioxidants, and can be used as a natural preservative to prevent spoilage of food seasoned with it. It is also credited with having antibacterial properties, and the ability to help relieve anxiety, insomnia, indigestion and high cholesterol. In traditional medicine, it is prescribed as part of the treatment for diabetes and acne.