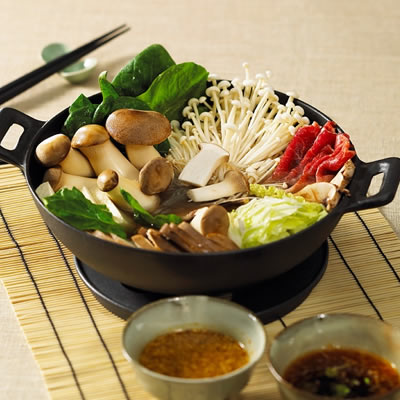 Enoki is the Japanese name for the long, thin white mushrooms that are so commonly used in Japanese, Chinese and Korean and other Asian cuisines. Looking at it, it’s easy to see why the Chinese call it ‘golden needle mushrooms’. It is interesting to note that the enoki sold in supermarkets are always cultivated in narrow paper cones to force it to grow long and thin, and are not exposed to light – resulting in its white colouration. Wild mushrooms have shorter and thicker stems and are a brownish colour. Enoki are available both fresh and in cans. When buying fresh enoki, a good tip is to pick the ones that have firm, white, shiny caps and avoid those that have slimy or brownish stalks. Fresh enoki can be kept refrigerated for about a week. Enoki have a mild, delightful flavour and a crunchy bite which makes it ideal for use in salads and soups. In addition to being good to eat, enoki are also good for health: it is a source of antioxidants and its stalk is rich in a variety of protein which helps regulate the immune system.