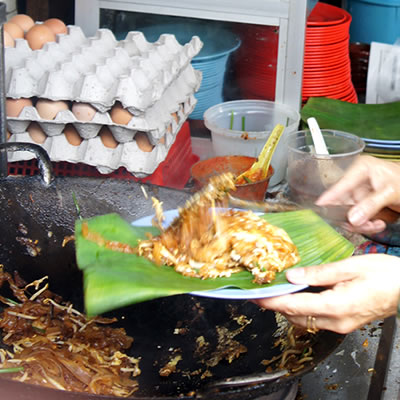 Eating street food is a favourite form of dining in Malaysia, and one of the most famous Malaysian street food dishes is char koay teow, which was believed to have been created by South-East Asian Chinese. It is essentially a stir-fried dish and its main ingredient – koay teow – is a flat rice noodle that one could describe as resembling a lighter version of tagliatelle. Translated from Hokkien, the dish’s name simply means ‘fried koay teow’. However, there’s more to this dish than just rice noodles. A typical plate of fried koay teow also has cockles, Chinese chives, Chinese sausages, chilli, fish cakes, bean sprouts, prawns, eggs, dark soy sauce, light soy sauce and sinful, flavour-packed crisp croutons of pork lard. It is sometimes served on top of a banana leaf for additional fragrance. There are many variations of this dish that can be found throughout Malaysia and South-East Asia, some adapted to use locally-available ingredients and perhaps some adjusted to suit local taste preferences. But the gold standard for char koay teow – recognised by connoisseurs as being the best in the world – originates from the island of Penang in Malaysia. The next time you travel to this part of the world, don’t forget to give it a try!