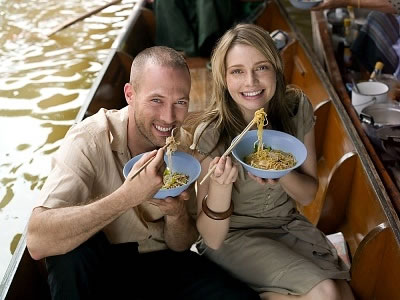 Pad Thai, which literally means “Thai-style frying”, is one of Thailand’s national dishes and well-loved outside of Thailand. And no surprise, as it presents a tasty symphony of flavours and textures in a simple plate of stir-fried rice noodles This dish is believed to have been brought to the ancient Thai capital of Ayutthaya by Vietnamese traders. Ayutthaya or Siam, which existed from 1351 – 1767, was one of the biggest and wealthiest cities in the East – a land of lush surroundings, intricate temples, gilded palaces and exotic culture. Pad Thai became popular as a national dish in the 1930s and 1940s, when the Thai government encouraged the production and consumption of rice noodles in an effort to export more rice to other countries. Since then, two different styles of Pad Thai have evolved – the dry, light version found in the streets of Thailand, and the heavier, oilier version that dominates restaurants in the West.