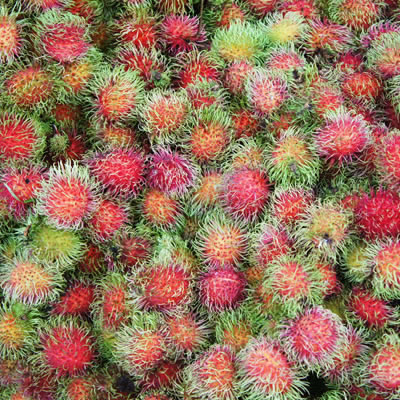 Rambutan is a medium-sized tropical tree in the family Sapindaceae. It is native to Indonesia, Philippines, Sri Lanka, Malaysia, and elsewhere in Southeast Asia. It is closely related to several other edible tropical fruits including the Lychee and Longan. The name rambutan is from the Indonesian word rambutan, which literally meanshairy referring to the spiky rind on the fruit, and is in general use in the Indonesian, Filipino, and Malay language. Without the soft spines on the rind, the rambutan would resemble the lychee, which is in the same botanical family. The structure internally is quite similar, with a single central inedible seed and edible white flesh wrapped around it but the skin is the part that makes the rambutan so distinctive in appearance. Rambutan is adapted to warm tropical climates, around 22-30ºC, and is sensitive to temperatures below 10ºC. Rambutans are most commonly eaten out-of-hand after merely tearing the rind open, or cutting it around the middle and pulling it off. It does not cling to the flesh. The peeled fruits are occasionally stewed as dessert. They are canned in syrup on a limited scale.