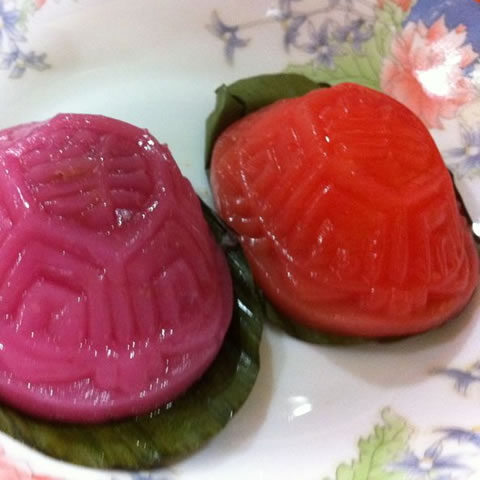 Red tortoise cake, also known as Ang ku kuih to the Hokkiens, is a small round or oval shaped pastry with soft sticky glutinous rice flour skin wrapped around a sweet filling in the centre. It is moulded to resemble a tortoise shell on a square piece of banana leaf.

Traditionally red in color, Red tortoise cake has a sticky chewy texture when eaten. Red tortoise cakes are shaped like tortoise shells because the Chinese traditionally believed that eating tortoises would bring longevity to those who are eating it and bring about good fortune and prosperity. Considered to be auspicious items, these sweet pastries are especially prepared during important festivals such as Chinese New Year as offerings to the Chinese deities. Also prepared during special ocassions, which are culturally important to the Chinese such as a newborn baby’s first month or birthdays of the elderly. Eating red tortoise cakes during these times are meant to represent blessings for the child and longevity for the elderly.

In modern times, red tortoise cakes is considered as a culturally important food during Chinese festivals in many countries such as Singapore, Malaysia, China and Taiwan. However, eating red tortoise cakes in these countries is no longer restricted to special occasions for red tortoise cakes are also commercially available in many pastry shops, bakeries and morning markets. As such, the color may also vary, from green to yellow to pink.

The skin is usually made from glutinous rice flour and sweet potato whereas the fillings are made from precooked ingredients such as mung bean or grounded peanuts and sugar. After kneading and molding the ingredients together, the red tortoise cakes are steamed on a piece of banana leaf.