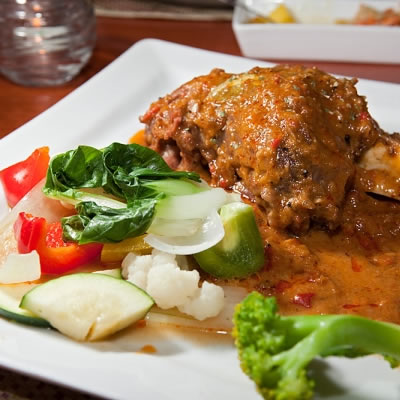 This is a dish that originates from the Minangkabau ethnic group of Indonesia, and has now become popular not only across the entire country of Indonesia, but also in neighbouring Malaysia and Singapore. There is a widespread misconception that rendang is a type of curry. Even in the countries where it is commonly enjoyed, certain curried meat dishes are mistakenly referred to as ‘rendang curry’. In actual fact, authentic rendang bears little to no resemblance to curry. Traditional rendang is typically made from beef, although chicken, mutton, water buffalo and duck can also be used as the main protein. In certain versions, jackfruit and cassava can be used in place of meat. The meat is cooked slowly in spices (which may include ginger, galangal, turmeric leaf, lemongrass and chilli) and coconut milk for several hours until the liquid is almost completely reduced. This slow cooking process allows the meat to completely absorb the flavour of the spices and become very tender. Because it requires time-consuming preparation, rendang was traditionally only prepared for ceremonial occasions and honoured guests. These days, however, rendang that’s sold commercially is becoming more common, allowing people to enjoy this delicious treat daily. Although it has to be said, homemade rendang is always best. There are two types of rendang: wet and dry. Dry rendang can keep for 3 to 4 months without refrigeration. Wet rendang has more gravy, but must be consumed within a month if not refrigerated.