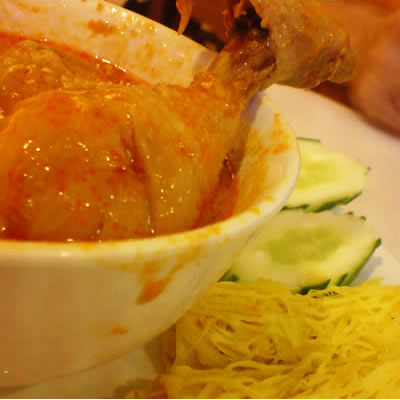 Roti Jala or literally translated in the Malay language as “net bread” is a popular Malaysian delicacy that is often served at gatherings, such as Hari Raya, or get-togethers. These savoury crepes have a net-like appearance, and are usually accompanied to be eaten with rich gravy dishes such as curry, usually chicken curry. It is easy to make, where cooking only takes a few seconds. A batter of eggs, coconut milk, and flour is poured in the funnel onto a hot pan and swiftly folded to form a netlike pancake. The roti jala are typically made with a special mould, which has five mini “funnels” in it. However, the mould can be DIY-made If you don’t own proper roti jala mould, where a makes hifft mould can be made by poking holes in a bottle. Ideal to be eaten as a tea time snack, however, Roti Jala is now eaten and enjoyed at any time of the day by Malaysians of all races and age and can be easilly found in food outlets and shopping malls.