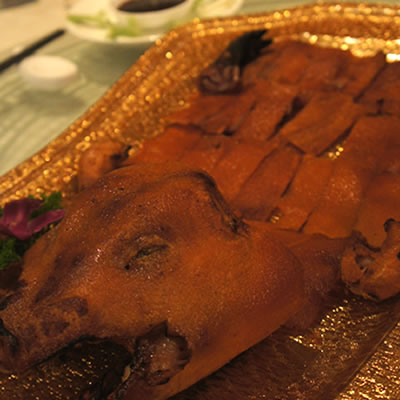 A suckling pig is a piglet fed on its mother’s milk and slaughtered between the ages of two and six weeks. Suckling pig is traditionally cooked whole, often roasted, in various cuisines. It is usually prepared for special occasions and gatherings, such as Chinese wedding dinners and Chinese New Year meals. The term derives from the word “suckling”, which refers to a young mammal still being suckled. The meat from suckling pig is pale and tender and the cooked skin is crisp and can be used for pork rinds. A roasted suckling pig is eaten not for its flesh, but rather for its skin. The skin is usually very thin and with the roasting, it takes on a very crisp texture which is the measure of a good roast suckling pig. The flesh is seasoned with spices to add to the flavour. A roast pig is usually served chopped up but reassembled to look whole, and is served with a sweet dipping sauce and chilli, and spring onions. Roasted suckling pig or siew chu (in Cantonese) is not only unique to the Malaysian Chinese, but is also found in many other South East Asian countries. The roast suckling pig in Thailand and Philippines are especially noteworthy.